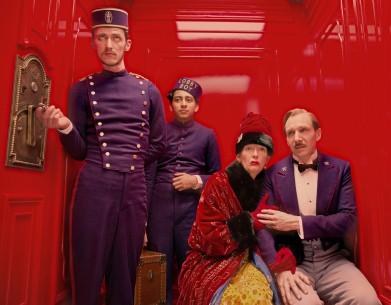 Wes Anderson’s films tend to be whimsical, quirky and rich with details that demands your total attention. If your eyes stray even for a second you may miss an important detail. These were the thoughts that  popped into my head as I sat down to watch a preview of the film in San Francisco. I had heard about Anderson’s new film The Grand Budapest Hotel, but had barely read anything about it. In general I try not to read any reviews when I go to see a new film. I may see a trailer of the film and if it grabs my attention will then decide to see it. And the trailer of Anderson’s The Grand Budapest Hotel grabbed my attention alright.

A sudden hush descended upon the theatre as the first frame of the film streamed on the silver screen. It was a visual of a cemetery that  looked more like a painting.  A young person person walks  down the cemetery path clutching a book  titled The Grand Budapest Hotel. And that was the start of a fanciful celluloid journey that takes you through 1930s to 1960s Eastern Europe and it is the story of a concierge and his grand hotel, which is where the rich and famous repair to have a relaxing time.  Through the film you also witness how the posh hotel decline and look quite frayed at the edges from its height in the 1930s to the 1960s Communist era when they were famously behind the “Iron Curtain.” Perhaps director Anderson wanted us to show us a glimpse of what East Europe looked in the interwar period  (1919-1939) and the Cold War era? I digressed.

Monsieur Gustave (Ralph Fiennes) is the central character in The Grand Budapest Hotel. Set in the 1930s Anderson wrote the part with Fiennes in mind. Fiennes delivers and is utterly delightful  and charming. He veers between his usual suave self to being a bit crude and tough when the situation demands. This is not how you often see Fiennes- there is a bit of a hammy edge to his performance  in this film and to boot he is a bit of a lady’s man.

Monsieur Gustave takes special care of his clients, especially the women folks who are rich, old, blonde and insecure that came to stay at the expensive and well-appointed hotel. And therein lies the tale of how Monsieur Gustave gets entangled with a rich lady, who leaves her wealth to this smooth talking concierge. But, then you see the rich lady’s family members do not take kindly to this state of affairs  and they put up a good fight. What unfolds is a delightful tale of greed and intrigue spiked with loads of humor. But, this is my take. Perhaps you may see the film differently.

Helping Monsieur Gustave run the hotel is is his newly appointed lobby boy – Zero (Tony Revolori). An earnest and sincere worked Zero became a devoted student of the concierge and gets firmly entangled in the “inheritance” drama that Monsieur Gustave is involved. Ravolori delivers a fine performance and shines brilliantly in the film.

The film has the usual suspects that you generally find in a Anderson film – Bill Murray, Ed Norton, Owen Wilson and  Adrian Brody, But this time they are joined by William Dafoe, Jeff Goldblum, JJ Abrams, Jude Law and Tilda Swanson.

The film is set in a fictional East European country of Zubrowka. “Our country is invented,” points out Anderson and “Budapest get a special mention” in the film. The Grand Budapest Hotel is also Anderson’s homage to the East European filmmakers of Hollywood, who made films about East Europe in sets re-created in Hollywood points out Anderson. Austrian novelist and playwright Stefan Zweig’s works inspired Anderson, who wrote the screenplay of the film.

The film is incredibly rich in details and Anderson creates a whole world where his characters live, breather, love fight and cry. The colors and the composition in each frame in the film kept me riveted to my seat. You absolutely cannot miss the attention to details that Anderson and team have paid as you watch the film. For example the cake box used in the film has an interesting backstory. Apparently Anderson wanted a box that would open in one fluid moment and Roman Coppola apparently designed the box just to do that. If you pay careful attention you will notice how the cake box opens in one fluid motion.

The Grand Budapest Hotel is an arresting tale. It is like an absorbing & charming pop-story for that little child that is ever-present in every adult.