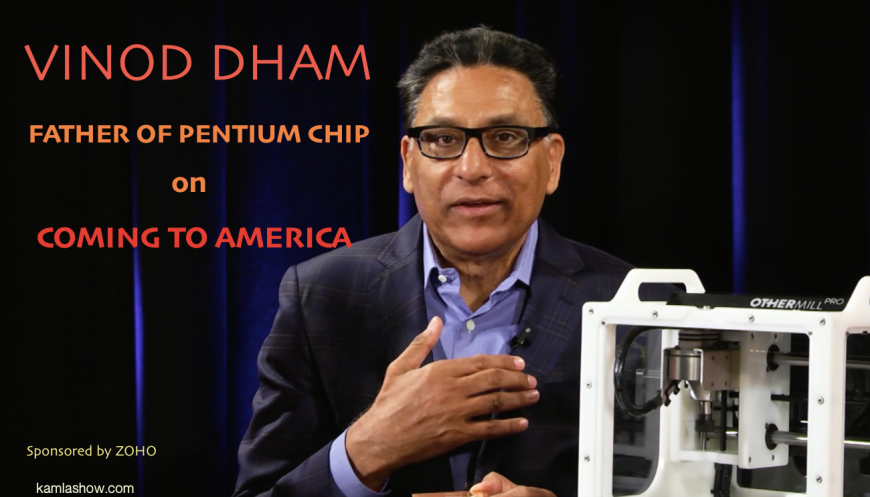 Silicon Valley-based Vinod Dham is an engineer, investor and an entrepreneur. He is perhaps best known as “The Father of the Pentium Chip.” Ever wonder how Dham got that moniker? We were curious to find out about it, and his journey to America and to Silicon Valley, where he initially worked for Intel for many years before working for other hardware companies that were eventually acquired. One of them that he worked for was acquired by Intel and the  second company Silicon Spice was acquired by Broadcom.


We spoke with Dham about how why and how he decided to come to America to study. After graduating from Delhi School of Engineering Dham went to work for a hardware company in Delhi and then decided to come to America for his graduate studies. He had to buy a map from Connaught Place to figure out where in America his school was located. He first worked for NCR in Ohio, and then came to Silicon Valley to work for Intel in the 1970s.

Dham went on to work for other companies, turned an investor and is currently the co-founder of an online learning company called Acadgild.

This interview was sponsored by Zoho Corp and aired on TV in the USA. You can watch the interview on our YouTube channel.

Ever wondered how Vinod Dham got the moniker  “The Father of The Pentium Chip?”  Well, we did and got an opportunity to talk to Dham on how he got this moniker. We were also curious to find out  how he developed his interest in science and technology. What brought him to America? How did come to Silicon Valley in the 1970s to work at Intel and eventually in other hardware companies?

After graduating from Delhi School of Engineering in India, Dham worked for a hardware company in Delhi before coming to America for his graduate studies in the Midwest. He had to buy a map from Connaught Place to find out where exactly his university was located in America. His first job in America was at NCR, a pioneering company in Ohio before he  headed west to Silicon Valley in the 1970s. It was in Silicon Valley that Dham established a name for himself in the hardware space. He eventually became an investor and is now the co-founder of a startup called Acadgild.

Tune in to find out all this and more about Dham on coming to America and his work in tech industry.

This interview aired on TV in the US.